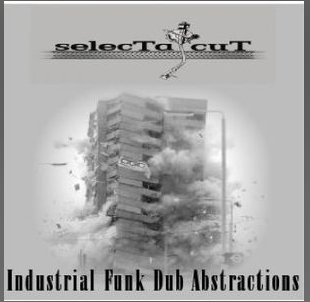 Listen to Industrial Funk / Dub Abstractions I on Mixcloud below.

This is the first blog in the reboot of V.E.O.T.R., the previous episodes were video format, (see previous Vinyl Encounters Of The...Rewind! episodes HERE) but I am a better written communicator than a verbal one, so this seemed like a more effective way to expose people to records that I find to be interesting.

I'm going to examine some of the mixes that have been airing on CULTCHA Clash Outer National Global-Community-Radio, there are at least 50 mixes that I made from 1994 cassette mix-tapes to digital mixes that I'm working on to this day.

When I started actually recording my mixes (around 1993 when my roommate Rob had a set of Technics 1200's on the living room floor), most of my DJ friends (who I knew, mostly, from the Industrial / Alternative scene) were playing House or Techno but I preferred a lower tempo, I was into more Hip-Hop and Dancehall Reggae by then than I was any Alternative music which is what I more or less grew up listening to. There was an Alternative radio station here in AZ when I moved here in 1990, I heard it used to be good, but by the time I was here they were playing the same 10 songs all day long and the whole thing had a pretty corporate vibe. That, coupled with the fact that I was hanging out at a pretty lame teen-club every week (Blitz aka DV8, I made some good friends there, but the DJ was TRASH! with a fake English accent to boot!) and "Grunge" was getting really popular so one couldn't avoid hearing the same Sub-Pop songs in constant rotation ad nauseam (I love a lot of those songs now, but got so tired of hearing the same ones over and over...), got me to the point that I wanted to hear something new. Hip-Hop already had my attention, especially the conscious stuff, Dancehall was relatively new to me at that time, I loved Reggae from the first time that I heard a skank and a rub-a-dub bass-line, but wasn't extremely literate in it...so it was fresh and exciting! Within a few years I was able to actually make a name for myself, locally, as a Reggae Selector.

After that point, throughout the nineties I specialized in Dancehall, occasionally mixing Hip-Hop, but less as the years went on. By 2005 or so, most Hip-Hop that I was hearing wasn't keeping my interest and the modern Dancehall started to sound all the same. I went into some financial troubles and started selling many of the records from my collection (close to 10,000 records at that time as I had spent several years in a record-pool). When I came to the "Alternative" crates, I couldn't let go of a lot of those records even though some hadn't been played in over 10 years, I started listening to them and found that some of those tunes had really withstood the test of time and sounded even better than I had remembered them.
That's when I decided to start this mix series, Industrial Funk / Dub Abstractions. The title is my own description of the sound, some artist may take the label "Industrial" as a pejorative, or a purist would say that Industrial is exclusively Throbbing Gristle and music that was released on their Industrial Records. I'm not attempting to classify or categorize any of the artists included here, I'm using the term as a personal interpretation as more of a reaction to the music industry itself than an actual "sound."

It took a year or so to let the concept marinate and finally get to making the first Industrial Funk / Dub Abstractions, but it was completed in 2009. I had ended up staying at my parent's house and I remember setting up in the garage to record, and editing in a cramped spare bedroom that I was staying in. In a way, one could say that this mix was a way of "getting back to my roots," I think of it as the mix that I would have made when I first started spinning had I the technical ability to do so. It seems as if the times have finally caught up with some of this music and, in my opinion, it can now be appreciated on a larger scale.


This mix is composed of music no less than 25 years old, but many of the artists are still active, I've included links whenever possible to further continue the mission to entertain & educate.


The first tune is by Mark Stewart, front-man of The Pop Group, here backed by The Maffia aka TackHead aka Sugar Hill Records studio band (the rhythm section responsible for classics like "The Message," "White Lines" and "Rapper's Delight") on "Survival" from the 1987 Mark Stewart LP. Doug Wimbish's super-slowed down Chic bass-line dubbed out by producer extraordinaire Adrian Sherwood (On-U Sound), Kieth LeBlanc's drums of doom and Skip McDonald's  terrorizing guitar mutations provide the backdrop for Mark's interpolation of Grandmaster Melle Mel raps cried, shrieked or screamed out to a brain-dead society as a loop of Vincent Price cackles away. This tune epitomizes both the Industrial Funk as well as Dub Abstraction that I've tried to encompass in this series.


"Experience is the best teacher..." The next tune is another On-U Sound project, The Barmy Army "Sharp As A Needle," hooliganism and funky Dub, the 1988 12" single, this was one of my first On-U Sound purchases, from 7th Heaven Records in K.C., KS.


Bristol, the home of Mark Stewart and Gary Clail, also brought the next group, Massive Attack. 1991's "Safe From Harm," is probably one of the more well known tracks included here, I mixed in Mantronix "Get Stupid Fresh, Pt. 3," a 1988 left-field Hip-Hop track from the Jamaican-born beat-innovator, Kurtis Mantronik which qualifies as a Dub-Abstraction to me.

Renegade Soundwave is next in the mix with their 1987 pre-Trip-Hop version, "Kray Twins (Terror Drum Mix)," only used here as a quick segue with some dialogue from Mumia Abu-Jamal, American political prisoner, from his Spoken Word album on Alternative Tentacles.


"Depth Charge (Han Do Jin Mix)" by Depth Charge is a record that I heard in 1989, just before moving away from K.C., MO to Phoenix, AZ. When I got to AZ, I searched every record store in the valley, begging the clerks to find this record, to no avail... Luckily, my friend Samson & I started trading records through the mail and I ended up with a few copies. Great tune and made excellent usage of Kung Fu movie samples a few years before Wu-Tang Clan brought Shaolin-mentality to the Hip-Hop world, It's been one of my favorites for 30 years now.

Dub Syndicate make another appearance with the tune, "What Happened?" that came out in 1993 from a series of On-U Sound 10" Disco-Plates. Abstract Dub at it's finest, the type of quality that Dub Syndicate brought consistently up to Style Scott's tragic demise.

Jah Wobble (original P.I.L. bassist) and his Invaders Of The Heart come in next with Sinead O'Connor adding some vocals and Sherwood on the mix, once again on "Visions Of You (Ade Phases The Parameter Of Sound)" from 1991.

The following tune is "Windowpane" by Coil, off of their Love's Secret Domain album from 1990. Coil consisted primarily of John Balance and Peter Christopherson aka Sleazy who was in the original "Industrial" group, Throbbing Gristle. Neither of them are alive today but they were quite prolific and left an amazing body of work.

"Now Is The Time" is from the London LP by Greater Than One and was released in the U.S. in 1988 by Wax Trax! Records. GTO would go on to release records as John & Julie, Tricky Disco as well as other aliases and had quite a bit of success with Techno and Rave when that culture took off in the early nineties.

Big Beats and futurism abound when Sheffield's Cabaret Voltaire enter the mix next with "Doom Zoom" from the Funky Alternatives 2 compilation, released in 1987.


"Half Cut For Confidence" is a 1985 12" single from Gary Clail, who toasts in a Bristol style over the heavy duty funk groove provided by TackHead, who are on the following tune, as well. This time in the form of Keith LeBlanc from his 1986 album, Major Malfunction. The song is entitled "Technology Works."
"Mind At The End Of The Tether," released by On-U Sound and it's affiliate, World Records in 1985, continues the big sound of the mighty TackHead, in the area!

Next is a San Francisco band that I got to see live at The Outhouse (Lawrence, KS) when I was 16. Led by Michael Franti (The Disposable Heroes Of HipHoprisy, Spearhead), The Beatnigs combined Hip-Hop, Reggae, Industrial, Musique Concrete, Punk, Funk and other methods to broadcast their socially conscious message, making way for fellow Bay-Area Industrial-Hip-Hop collective, Consolidated. Featured here is the 1988 On-U Sound remix of "Television."

Malcolm McClaren and The World's Famous Supreme Team (with music construction / production from Art Of Noise members) are next up with the 1982 Hip-Hop / Punk fusion and B-Boy classic "She's Looking Like A Hobo," the b-side to the "Buffalo Gals" single.

TackHead alias Fats Comet is next in the mix with "Rockchester" a funky jam from 1987 featuring the vocal stylings of the late Bim Sherman and an infectious Fat Boys beatbox sample. This is one of the most memorable tunes that we would dance to in my teen years at Pogo's night club in K.C., KS, the place where I would first develop an interest in DJing.

Rinf, an Italian Industrial-Electro-Funk band's "Rubber On Rider" from 1988 is another Adrian Sherwood remix and another gem from back in the day.


Another big tune from my youth, Cabaret Voltaire appear once again with "Sensoria" from the 1984 LP, Micro-Phonies which saw the Industrial music pioneers venturing further into the world of Electro.

From the crucial 1981 Brian Eno & David Byrne LP, My Life In A Bush Of Ghosts, is "America Is Waiting." A young Bill Laswell played bass and arranged on this track.


Sheffield's The Anti Group (TAGC), Adi Newton of Clock DVA's long-running project, make an appearance with the 12" mix of their 1987 tune "Big Sex," from the label, Sweatbox. 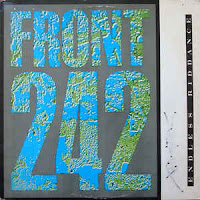 Belgium's Front 242, godfather's of EBM, enter the mix with "Take One" from the Wax Trax! Records release of the 1983 EP Endless Riddance, Cyber-Funk / Electro-Punk at it's finest! 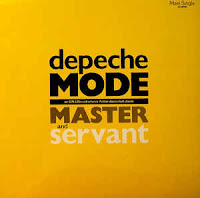 Depeche Mode  make an appearance with the Adrian Sherwood deconstructed and reassembled "Are People People?" remix of their 1984 hit, "People Are People."


23 Skidoo return to the mix with "Assassin," an Electro-fied aural assault from the 1986 release 23 Skidoo vs The Assassins With Soul from Illuminated Records.

The funkiest band on Manchester's Factory Records, A Certain Ratio make an appearance with the grooving "Knife Slits Water," from the 1982 LP, Sextet. Most of ACR's exceptional back catalog has been reissued and is available at acrmcr.com.


To finish off the mix, from 1981, it's The Clash "Outside Broadcast" mix of "This Is Radio Clash," one of the first Punk-Funk jams that I ever heard from the iconic band.


As you can see, this mix was very personal to me, and it has turned into my longest running mix series (currently at 10!). I hope that you have enjoyed this dissection and take time to listen to Industrial Funk / Dub Abstractions I, and check out other mixes and original programming at CULTCHA Clash Outer National Global-Community-Radio and check here for the next blog, coming soon! 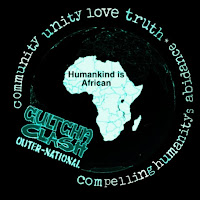 Posted by Cultcha Clash Outer National at 10:49 AM